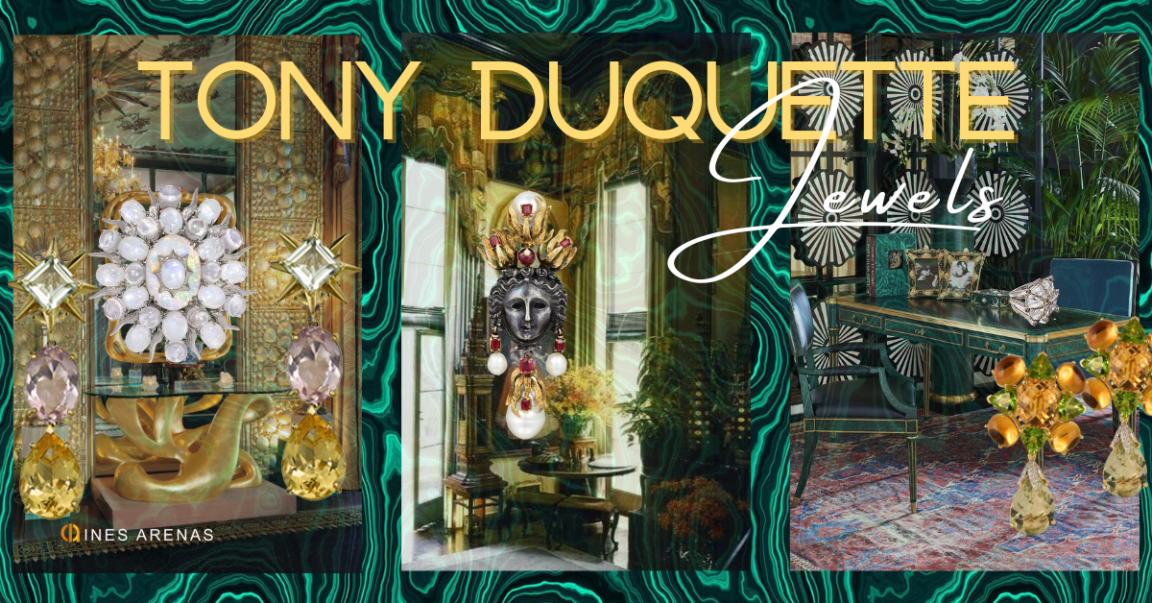 “Tony Duquette” was born in Michigan and lived in Los Angeles, California since 1935 until his death in September 1999.

The grandson of the late Bolivian president Don José Luis Tejada-Sorzano Conde de Alscaya, Wilkinson was introduced to jewels by manner of his family’s extensive collection, which consisted mostly of classic Victorian and Edwardian styles. One day, the young boy came across the Byzantine and baroque jewelry of Tony Duquette in a magazine. They were “bold, theatrical, and extravagant, even barbaric,” he recalls. The dice was thrown. Their paths would cross some 10 years later.

Having a talent for Arts and specifically for design in general; as a student was awarded with a scholarship at the prestigious Chouinard Art Institute in Los Angeles and the Yale School of the Theatre.

It was during this time that Tony Duquette was discovered by Lady Elsie de Wolfe Mendl, a woman who will patronage him jointly with Sir Charles. Duquette will establish himself as one of the leading designers in Los Angeles, where he worked increasingly creating beautiful costumes and settings for many Metro Goldwyn Mayer productions and the legendary director, Vincent Minnelli.

In 1949 Tony Duquette married the talented artist Elizabeth Johnstone; his best partner in life, not just from a personal point of view but in business as well. Their talents complemented each other’s, collaborating on many design commissions together and were sought out as an attractive addition to the Hollywood social scene; is this the starting point of the jewelry design world for Duquette.

His signature style in any field in design including jewelry was “More is More”; the reason why his jewelry were made in 18-karat gold and dripping with precious and semiprecious stones; recalling the splendors of the great courts of Renaissance kings, Chinese emperors, and Maharajas.

Tony Duquette presented his first exhibition at the Mitch Liesen Gallery in Los Angeles and shortly thereafter was asked to present his works at the Pavilion de Marsan of the Louvre Museum, Paris. This was an unprecedented exhibition as Duquette was the first American artist to have been honored with a one-man showing at the Louvre.

After this success, he received design commissions from the Duke and Duchess of Windsor and the Alsatian industrialist Commandant Paul-Louis Weiller. Duquette was honored by exhibiting his works at the Los Angeles County Museum of Art, the M.H. de Young Museum, and Palace of the Legion of Honor in San Francisco, among others.

In 1956, open with his wife and business partner Hutton Wilkinson the atelier “Tony Duquette Studios”.

After 46 years of marriage and artistic collaboration with Tony, Elizabeth died from Parkinson’s disease in Los Angeles.

He continues working alone in every design field that he felt inspired with, until September 1999; leaving behind a luxury jewelry collection, an exquisite jewelry box, tempting all to peek inside and discover untold treasures.

Tony Duquette and his partner: The Jewelry Designer Hutton Wilkinson.

“Hutton Wilkinson” was born in Los Angeles, California; and grew up in a family of architects. At the age of eighteen, he had the opportunity to start to working with the American design icon, “Tony Duquette”. @HuttonWilkinson worked for Duquette as a volunteer apprentice for two years and then as a paid assistant designer for three years, before starting his own interior design firm.

As we wrote in the article about designers in the last April, the brilliant designer Tony Duquette was a creative force whose designs extended from painting and sculpture, to stage sets and interiors, to costumes and jewelry. After creating the famous “Floral Wreath” necklace, commissioned by the Duke of Windsor for his wife in the early 1950s; Duquette went on to complete jewelry commissions for special clients through his career until his death at the age of 85 years old in 1999. After Duquette death, Wilkinson continues as the owner, creative director and president of Tony Duquette Inc.; and still today he continues to design and market fine jewelry as well as a collection of home furnishings.

In 1998 Wilkinson and Duquette, launched a collection of one-of-a-kind, fine jewelry, which has been popularly accepted by both the public and the fashion press. Since the success of this new enterprise, Wilkinson has devoted much of his time to the design of these unique jeweled creations under the “Tony Duquette” trademark in the most exclusive stores across the USA.

Inspired by nature and a creative assemblage of stones and design, Hutton’s one of a kind pieces for Tony Duquette are mini masterpieces. As Hutton explains, “The Tony Duquette collector not only appreciates these pieces as works of art but also for the sheer pleasure they bring regardless of whether they are comprised of pebbles and shells found washed up on the beach or diamonds and rubies”. Magazine: quintesscense. Tony Duquette | Hutton Wilkinson Jewelry at Kentshire. on June 24, 2016 by Stacey Bewkes

Tony Duquette Jewelry is not for those seeking dainty understated jewels. These are bold, spectacular statement pieces, rich in color, detailing and extravagant workmanship. As Hutton explains, “We have no snobbery of materials at Duquette and treat the lowest moonstone to the same extravagant workmanship in gold that other jewelers might lavish on a precious diamond”.
For us Tony Duquette style can understand like: “WE JUST LOVE THE CAPACITY OF JEWELRY DESIGN FOR TRANSMITTING BEAUTY, FOR TRANSMITTING ART”.

“Describing the Tony Duquette maximalist jewelry style, Wilkinson comments, “The stones tell us what they want to be.” Where another jeweler may make a drawing of a buttery and have each stone carved or cut to to size, at Tony Duquette, they work with a collection of existing stones, most of which are not calibrated. “If the stones want to be a necklace, bracelet, earring, or ring, that is what we will make. You have to hear what the stones want; you have to listen,” he says.” MAY 24, 2018 The Story Behind Tony Duquette’s Extraordinary Jewelry by Caterina Minthe.

…or maybe we will just learn how to appreciate a Tony Duquette Piece of Art with the words of Mr. Wilkinson. 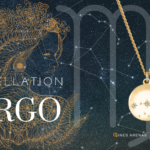