What’s the Birthstone Color for Taurus?

Practical and well-grounded, Taurus is the sign that harvests the fruits of labor. They feel the need to always be surrounded by love and beauty, turned to the material world, hedonism, and physical pleasures. People born with their Sun in Taurus are sensual and tactile, considering touch and taste the most important of all senses. Stable and conservative, this is one of the most reliable signs of the zodiac, ready to endure and stick to their choices until they reach the point of personal satisfaction. Taurus is an Earth sign and has the ability to see things from a grounded, practical and realistic perspective. They find it easy to make money and stay on the same projects for years, or until they are completed. What we often see as stubbornness can be interpreted as commitment, and their ability to complete tasks whatever it takes is uncanny. “Jewelry needs to fulfill the function for which it came into being. The only way that a Jewelry Designer will see its art in LIFE is with the eyes, the mind, and the heart of the Spectator. The viewer in the last stroke in any jewelry piece”. – Ines Arenas Jewelry Gallery The earthly notes of their character as the Emerald hue make them overprotective, conservative, or materialistic at times, with views of the world founded on their love of money and wealth.

The emerald has been a gem of fascination in many cultures for over six thousand years. It is so prized, that carat for carat, a fine emerald maybe two to three times as valuable as a diamond. According to Indian mythology, the name emerald was first translated from Sanskrit as “marakata,” meaning “the green of growing things.” The name we know it as now is believed to come from an ancient Persian word, translated to Latin as “smaragdus,” and eventually over time, corrupted to “emerald.” Records show that the stone was known and sold in markets in Babylon as early as 4000 BC. It is a stone that was worshiped by the Incas and mentioned in biblical information about the apocalypse. The earliest reference to emeralds in Western literature comes from Aristotle. He was a great fan of the gemstone and wrote that owning an emerald increases the owner’s importance in presence and speech during business, gives victory in trials, helps settle litigation, and comforts and soothes eyesight. He also stated “An emerald hung from the neck or worn in a ring will prevent the falling sickness (epilepsy). We, therefore, commend noblemen that it be hanged about the necks of their children that they fall not into this complaint.”

The ruler of Taurus is Venus, the planet of love, attraction, beauty, satisfaction, creativity, and gratitude. This tender nature will make Taurus an excellent cook, gardener, lover, and artist. They are loyal and don’t like sudden changes, criticism or the chase of guilt people are often prone to, being somewhat dependable on other people and emotions they seem to be unable to let go of. Still, no matter their potential emotional challenge, these individuals have the ability to bring a practical voice of reason in any chaotic and unhealthy situation. Taureans are said to be deeply influenced by Venus, therefore they have a fondness for beauty, jewelry, and nature. It is no wonder then that astrology recommends the gorgeous emerald, with its lush green color, like the sun sign’s gemstone. The emerald is a beautiful stone with bright tones that look stunning when paired with gold. It is fitting for both modern and contemporary jewelry.

The Wandering Bull Being the one who betrayed their best friend, goddess Hera herself, this is an unfortunate being that has to wander the Earth in order to find freedom. As if something was always poking them behind their back, reminding them of happiness that once was, stinging and pushing forwards, they close up in their own worlds, lonely and separated from their core. To find love, a Taurus has to travel the world, change perspective or make a shift in their entire belief system and their system of values. A Taurean likes to feel close to nature and is in tune with the earth. Therefore, there is no better gemstone for a Taurean than an Emerald. It is thought that one of the main benefits of wearing jewelry with emeralds is that it attracts the cosmic power of Venus, which is believed to be powerful. Emeralds are said to have healing powers too. Taureans who wear emeralds could ease their health issues with eyesight, fertility, spine, and headaches. The emerald is also thought to increase the mental capabilities of a Taurean. Some astrologists recommend wearing the gemstone if you are looking for love. The emerald is believed to open the heart chakra and thymus chakra, thus enhancing the power of love.

People born in this sign are loyal and always willing to lend a hand of friendship, although they can be closed up for the outer world before they build trust for new social contacts they make. Many of their friendships begin in childhood with a tendency to last them a lifetime. Once they make a clear intimate connection to another person, they will do anything they can to nurture the relationship and make it functional even in the hard times. Home and matters of the family are very important to every Taurus. This is a person who loves kids and appreciates time spent with people who love them, respecting family routines, customs, and is present in all events and gatherings. They will enjoy hosting house parties for both their family and friends and don’t mind cooking a meal for a room full of people if they just have fun in return. Emerald can be mined all throughout the world, the three main sources are Colombia, Brazil, and Zambia. Other countries that have abundant Emerald deposits are Afghanistan, Australia, Pakistan, Russia, and the United States. The finest Emeralds can be found in Colombia.

Most emeralds are available in a rich green hue with a tinge of blue. The green of an emerald symbolizes nature, safety, fertility, and freshness – some say that the color of the finest emeralds is so beautiful that its green is above all other colors found in nature. Astrology states that the emerald has many benefits to a Taurean. It helps them in their love life, with prosperity as well as health. Whether you believe in astrology or just love interesting jewelry, emeralds make for wonderful, impressive pieces. The ones born between April 21st and May 20th are those who belong to the Taurus constellation. The Bull represents this constellation, as a symbol of level-headedness, provision, fertility, stability, confidence, and determination. The lucky stones for Taurus are green jade, carnelian, pyrite, malachite and rutilated quartz. Along time ago Taurus was for the Hebrews the first constellation in their zodiac and consequently, it was represented by the first letter in their alphabet, Aleph. To the Egyptians, Taurus symbolized Osiris and his sister Isis who was represented as a bull-god and cow-goddess respectively. However in the Greek myth, Taurus is Zeus in one of his amatory adventures. On this time, the god had fallen in love with beautiful Europe; similar to a beautifully faceted carnelian stetted in a bezel style bracelet made of pyrites; she was the daughter of King Agenor (Phoenician king of Tyre). One day Europe was walking with her courtiers and Zeus suddenly appears as a magnificent gentle white bull with horns made of rutile quartz. Europe didn’t feel any fear and her maidens gathered flowers which they hung around the animal’s neck.

His docility made Europe climb upon his back and immediately the bull jumped into the sea and swan away wildly because of the power of the malachite in his neck; reaching Crete where Zeus reveals himself and ravished her. They had three sons, and the first one Minos introduce de Bull Cult to Crete. Minos created the cult on Earth and Zeus created the symbol in the stars. Why? Because in the myth and on the Earth, is a creature that remains generous and kind-hearted. The ones born under this constellation live their life with honest determination, making their life as a beautiful polish green jade surrounded by diamonds as the stars. Jewelry in Article: 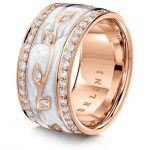 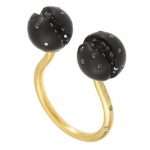