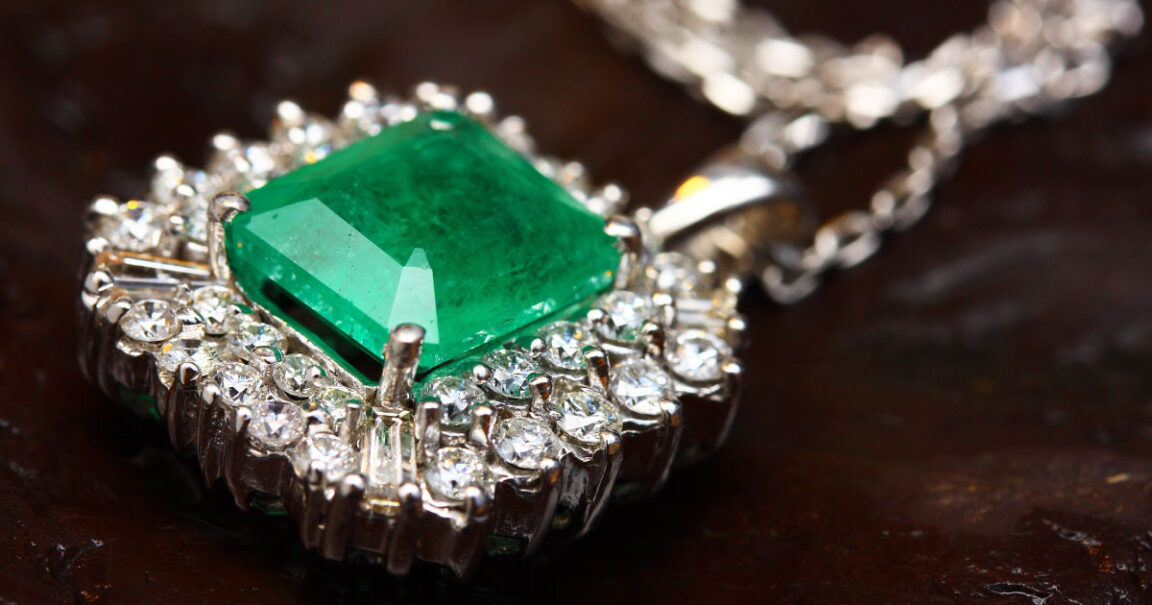 May Birthstone Emerald starts with the rain falls in the deepest jungle above the most abundant hue in nature, the human eye sees more green than any other color, and in all spectrums known in history, it seems that the world’s 4000-year love affair with May Birthstone emeralds is going to continue to sparkle and fascinate. Its name comes from the ancient Greek word, “smaragdus” which means “greenstone”. Rome’s Pliny the Elder described emerald in his Natural History, published in the first century AD: “…nothing greens greener” was his verdict. Emeralds also appear among the foundation stones of the Heavenly City in the New Testament Book of Revelation. “Jewelry needs to fulfill the function for which it came into being. The only way that a Jewelry Designer will see its art in LIFE is with the eyes, the mind, and the heart of the Spectator. The viewer in the last stroke in any jewelry piece”. – Ines Arenas Jewelry Gallery The Archbishop Rabanus Maurus of Mainz (786-856 CE) wrote about the significance of the twelve Apocalyptic gems. “In the emerald is expressed the strength of faith in adversity,” he said. Oftentimes, the May Birthstone Emerald was worn as a talisman, because of the belief in its ability to ward off evil spirits and possession. Symbolically, emerald represents clarity, rebirth, renewal, rejuvenation, and fertility. People believed emeralds could confer riches, power, eloquence, and the ability to predict future events. Emerald’s soothing green color was thought to be restful to eyes under strain. Many gem cutters used to keep emeralds on their workbenches, they would rest their eyes on them, after long hours of close work on other gems, even today. The rare and beautiful May Birthstone emerald is called “The Jewel of Kings”, it’s a gem called for greatness. Happy Birthday to the ones born under the most abundant hue spell in nature: “The Emerald”. May Birthstone.

Best Option For May Birthstone

Emerald: #7.5 to #8 on Mohs scale, poor to good toughness. Sources are Colombia, Afghanistan, Brazil, Pakistan, Russia, Zambia. Colombia is one of the largest commercial producers of emeralds. Fine Colombian emeralds are highly regarded for their excellent color. Zambia, a major commercial source, as well. Zambian emeralds tend to have good clarity. Zimbabwe, the Sandawana Valley to be more specific, is also a famous source.

How To Choose the Best May Birthstone?

May Birthstone the emerald is the most famous and recognizable member of the illustrious mineral beryl family. If you’re looking to purchase an emerald, whether loose or set in jewelry, there are several factors to consider to avoid disappointment. Let’s take a look at what you need to know before you buy an emerald. Color as in many other gems is the most important feature of an emerald. After all, the very word emerald is synonymous with green and if it’s not green, it’s not an emerald. Unlike many other gemstones such as sapphires and diamonds, emeralds come only in the color green. Emeralds can come in a range of greens, from vivid and vibrant to pale and limp. What gives Emerald the most beautiful green color is the combination of three factors: hue, tone, and saturation. Emerald Hue: The hue refers to the primary and secondary colors of the gemstone which, in the case of emeralds, will be green with possible secondary colors of yellow or blue. Emerald Tone: the tone refers to how light or dark the color of the emerald is. The best emeralds have a medium tone and are neither too light nor too dark. An emerald that is too light can appear limp and inexpensive, while an emerald that is too dark will not have the vibrancy and color that emeralds are known for. Emerald Saturation: saturation refers to the intensity and strength of the color present in the emerald. The higher the saturation, the more vivid the color, which then correlates to higher prices. An ideal, well worth Emerald will have a medium to light tone with high saturation and a bright green hue. The green color in Emeralds should be evenly distributed across the stone without any major color uneven distribution (zoning). A simple blue strip or section of the stone that has a different color than the majority of the stone would be an emerald with color zoning. Wich could affect the price of the stone to be worthless. This is not to be confused with pleochroism. Pleochroism in emeralds is the appearance of different colors from different angles. This is also less than ideal in an emerald And May Birthstone Emerald free of inclusions or blemishes is incredibly difficult, for not to say suspicious. Natural emeralds are among gemstones with the most inclusions of all gemstone varieties. During their formation, liquids, gases, and trace minerals get trapped in the stone. Emerald inclusions, which often resemble long vines and tendrils, have been given the term “Jardin”, meaning garden in Spanish. When searching for an emerald, you want to find a stone that has higher transparency and fewer inclusions, these are also the most expensive ones, but be aware that inclusions contribute to the and Emerald beauty, and so have come to be accepted. Popular shapes for emeralds are oval, pear, cabochon, hearts, and cushion, and as with most gemstones, the size of the stone directly correlates with the cost. The larger the emerald the greater the cost. But if you are decided on a smaller stone, choose an Emerald with very good because is going to be more valuable than a larger stone with poor color. A May Birthstone Emerald with an excellent cut will maximize the color of the stone, rather than its brilliance, which is the case with colorless diamonds. Symmetrical, open, and uniform facets are ideal to promote the color and brilliance of emeralds. A traditional cut for an emerald is the emerald cut. This cut has large open facets, which enhances the color and size of the emerald. It also reduces the waste and makes the most of the emerald rough. Another very favored cut is round. This is an ideal cut for rings and especially engagement rings because it works to display the shine and brilliance of the emerald and is also incredibly elegant when paired with diamonds. This, however, is more expensive as it wastes a lot of the emerald rough.

How To Take Care of Your May Birthstone Jewelry?

May Birthstone Emeralds rank 7.5 to 8 on the Mohs scale as we mentioned before making them fairly scratch-resistant. However, due to their many inclusions, they are extremely susceptible to cracking and chipping. Avoid using ultrasonic cleaners as these can exacerbate the fissures in the stone. It is best to clean the stone or jewelry by hand using soap, water, and mild soap. It is very important to dry your stone thoroughly after cleaning because letting the emerald sit with water on it for too long can damage the stone and setting. It is a good idea to store your Emeralds alone or in their protective box or bag. This will not only protect your emerald from other harder stones that could get shuffled around but it will protect your softer stones from being damaged by the emerald. And finally our signature recommendation: Remove your jewelry if you are going to work with harsh chemicals. 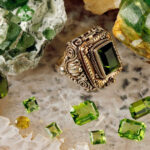 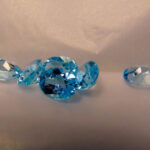