The name ruby comes from the Latin word Ruber, which means “red”. Greeks consecrated the gem to the god Apollo. In China, it was considered the best offering to Buddha, and in India in the ancient language of Sanskrit, the July Birthstone ruby is called Ratnaraj, or “king of precious stones” consecrated to Krishna. Islam tells the legend that the stones of Mecca were a beautiful and very bright ruby, which turned black by the will of Allah, due to the sins of men. Christianity erected this gem as a symbol of charity, of the victory of the spirit, of the perfect man. A legend says that “rubies are a drop of blood from the heart of the earth that unites the people on earth”, for this July Birthstone The Ruby, is considered the lord of the stones; all human races are one; holding the legends something of true. Kunz wrote that “the flashing and ruddy light of the ruby suggested an igneous origin”, inducing the belief that Rubies were generated by a fire from heaven, by a lightning flash; that if you cast a Ruby into the water, the liquid will boil. “Jewelry needs to fulfill the function for which it came into being. The only way that a Jewelry Designer will see its art in LIFE is with the eyes, the mind, and the heart of the Spectator. The viewer in the last stroke in any jewelry piece”. – Ines Arenas Jewelry Gallery Theophrastus and Pliny said that the ruby emitted red light when is illuminated by the Sun, and they were right. It is the red fluorescence that is induced by white light. Holding the legends something of true. It is said that the ruby was the most precious stone of the twelve that God made in all things, and this Lord of gems was placed in the breastplate of Aaron by God’s command. In the Bible, Job says that wisdom is more precious than rubies. It’s said that both women and men of strong character and high destiny are born with an inner Ruby; maybe a good heart? Holding the legends again something of true. Are you starting to believe in the July Birthstone Ruby? I must confess that I fell in love with the legends. Happy Birthday to the ones born in July with a so incredible special gem!

Ruby: Ruby is a #9 on the Mohs scale, usually excellent in toughness, but with certain treatments or large fractures/inclusions can be less durable. Sources are Afghanistan, Kenya, Madagascar, Myanmar (Burma), Sri Lanka (Ceylon), Tanzania, Vietnam, and Thailand. Thailand is the world center for treatment and wholesale trade and mine production of rubies and has been declining since the 1990s. Myanmar is considered to produce the finest quality rubies. Where Sri Lankan rubies are often lighter in tone than rubies from Myanmar(Burma) or Thailand.

How To Choose the Best July Birthstone?

With so many varieties of ruby on the market, buying the perfect stone can prove difficult. To be able to make an informed decision about if the ruby is right for you, let us give you some advice: Color is the most important factor when choosing a ruby. Rubies are made of the same material as sapphire: corundum. All other corundum colors are called sapphire except red, which is called: Ruby. The most desirable July Birthstone Ruby is the one with the color: Pigeon Blood Red; which has a very vivid red color. Pigeon blood rubies are very rare and very expensive because they contain no secondary colors. The GIA grades color according to hue, saturation, and tone (as the Emeralds): • Hue: refers to the basic color of the stone in this case quality ruby should have a red hue. • Saturation: refers to the intensity of the color. This is graded on a scale from 1-6. If the intensity of the color is low, it will appear as a brown or grayish color meaning color “1”. If the stone has a higher intensity is evident, and a vibrant and strong color it will reach into the scale to number: “6”. • Tone: refers to how dark or light the color of the stone is, with a colorless being 0 and black being 10 on the grading scale. So if you are looking for a high-quality ruby, this stone should have a dominant hue of red, vivid saturation (6), and a dark tone (6). On paper, the ruby will be noted as having a color grade of R 6/6. Such a ruby would be very valuable and command a higher price. As all-natural gemstones, the Ruby is not an exception and has small inclusions. These inclusions can be anything from small gas bubbles, liquid, or trace amounts of other minerals which appear as cracks or lines through the stone. So, regarding the Clarity of ruby, the most important factor is to look out for visible inclusions. If the ruby is eye-clean or has inclusions in hidden areas, then this will not affect the beauty of the stone. The clearer the stone and fewer the inclusions, the more expensive it becomes. While most inclusions are generally seen as negative, there is one exception when it comes to rubies. In Rubies, inclusions can cause an effect u=in the stone called Asterism which means that the inclusions inside the stone can cause a star-like effect on the ruby. The star can appear as a three or six-pointed star on the surface of the stone and are usually very symmetrical. The July Birthstone Ruby that exhibit asterism have to be carefully cut to maximize the appearance of the stylish cabochon cut. Be aware that some types of treatments can be applied to Rubies such as: • Heat Treatment: This treatment is conducted to promote the color and clarity of the stone, and remove any rutile that could be altering the appearance of the stone. This treatment does not harm the durability or value of the stone and is widely accepted in the market and doesn’t minimize the value of your Ruby. • Glass Filled: this process includes bleaching the ruby, filling any cracks or fissures with glass, and then coloring the stone to give it its vibrant red color. These stones, while they appear beautiful, can be less stable and more likely to break when exposed to heat or chemicals, and therefore less valuable. • Flux Healed Rubies: this is a treatment used to stop rubies from sticking together during the heating process. The rubies are coated with a layer of flux material which will protect them from sticking. The benefit to this process is the ability of this flux material to penetrate the depths of the stone and fill in any cracks and crevices. It does diminish the value of the stone slightly because it is a foreign material being inserted into the stone. Do not feel or be frustrated regarding the size of July Birthstone Ruby, because are often found in less than one or two carats. Rubies larger than this are incredibly rare and would therefore be very expensive, if you want a large ruby, you may consider looking at synthetic rubies. These can often be larger than naturally occurring rubies and more cost-effective. But remember small rubies have a vibrant color and elegant look and can be used in a unique way to provide glamor and elegance to any piece of jewelry. Finally, the origins of the July Birthstone Ruby are very important, and contrary to popular knowledge Indian rubies are generally considered cheaper and are darker in tone. Mozambique rubies were discovered in 2009 and have quickly become one of the best ruby sources. The rubies from this mine are very fine and beautiful, comparable to even the famous Burmese rubies.

How To Take Care of Your July Birthstone Jewelry?

Rubies as we have mentioned before in this article, rank 9 on the Mohs scale, meaning that they are highly scratch resistant. Most rubies have no cleavage, which means that they are highly resistant to fracturing. Rubies can be cleaned in ultrasonic jewelry cleaners as they are quite hard, but it is preferable to clean them by hand using soap, water, and mild soap. It is important to dry your stone thoroughly after cleaning as leaving water resting on the stone could damage both the setting and the stone. When storing your ruby, keep them away from softer gemstones as they can scratch them. Store your ruby in its compartment, small bag, or box to protect your other jewelry and your Ruby. 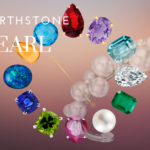