Virgo, the Maiden, is the fifth sign in the Zodiac and represents those born between Aug. 23 and Sept. 22. The word “Virgo” is Latin, which means “self-contained” which is for us is better interpreted as “self-sufficient”, and an individual who can fulfill others and itself like mother Earth, be green a the Jade. The Virgo myth should not be interpreted as a woman who is a virgin, but rather a nurturing woman who is a mother to all of the earth. Immaculate conception aside, we all know that mothers can’t also be virgins represented by the color of the Moss Agate. “Jewelry needs to fulfill the function for which it came into being. The only way that a Jewelry Designer will see its art in LIFE is with the eyes, the mind, and the heart of the Spectator. The viewer in the last stroke in any jewelry piece”. – Ines Arenas Jewelry Gallery Most of the goddesses who were linked to Virgo were considered fertility goddesses, or goddesses of the harvest. Of course, Virgo’s myth has a relation with the view of Virgo being the caretaker of mankind through her green and blue fertility as the Malachite and the Sapphire. This includes Ceres (Roman mythology), and Demeter (Greek mythology). The constellation Virgo is thought to be a woman holding a spike of yellow corn as the Citrin, thus reinforcing the Harvest Mother in any mythology. Do you remember the article the Creation of the Seasons published in December 2018?. The goddess of the Spring season Persephone is kidnapped by the god of the underworld Hades. Upon discovering this, the young goddess’s mother Demeter, being the goddess of the harvest, decides to ruin the harvest in her despair, all the surroundings taking the brown color of the Carnelian. The Spring goddess got to return for six months a year to aid her mother in the harvest when the skies recover the blue color of the Sapphire. This coincides with the constellation Virgo being visible for only the months of March through August. In astrology, those born under the sign of Virgo are said to behave in an individualistic, self-sufficient manner. Their nurturing comes from a place of not needing others to find fulfillment for them, but being able to create for others because they can already create for themselves like the colors of Mother Earth full of the blue and green palette as the Jade and The Sapphire.

Since Mercury is the ruling planet of this sign, its representatives have a well-developed sense of speech and writing, as well as all other forms of communication. Many Virgos may choose to pursue a career as writers, journalists, and typists, but their need to serve others makes them feel good as caregivers, on a clear mission to help. Virgos are known to be perfectionists who plan to the last detail and are extremely thorough in their execution of tasks and projects. Those born under this sun sign are extremely careful and hardworking, using their analytical and practical traits to help them achieve difficult and complex tasks. Wearing Sapphire (Virgo Birthstone) is said to influence Virgo’s life, both personally in their relationships, and professionally in their career path and business goals. These influences are also said to depend on the position of Virgo’s ruling planet Mercury.

Virgo Constellation stone the sapphire is the birthstone for September. The name sapphire is derived from the Latin word “saphirus” and the Greek word “sapheiros,” both meaning blue. Some believe that the name sapphire is derived from its association with the planet Saturn. The name can be roughly be translated to mean “dear to the planet Saturn” in many different languages. The beautiful Sapphire has been one of the most valued and cherished gemstones for centuries, its brilliant blue hue charming royalty and noblemen through the ages. Sapphire was often used by royalty and religious Christian leaders to signify their purity and importance. Ancient Romans used the stone for its apparent protective values against wrongdoing and envy. Fancy sapphires (Virgo Birthstone) come in a range of colors such as green, orange, pink, yellow, purple, yellow, and even darker colors such as brown, gray and black. A unique sapphire color that is prized by gem connoisseurs is the pinkish-orange padparadscha sapphire, named after the Sinhalese lotus blossom.

The blue color of Virgo Constellation stone the sapphire is representative of many powerful and evocative symbolism. It is the color of the skies and the stones were believed to mirror the importance of nobility, represent truth and loyalty. The Disappointed Goddess Seeking goodness in humankind is the story of Virgo, and disappointment seems to be inevitable from their point of view. The first time they came from their cloud and jumped onto planet Earth, it felt like their mission is to use their existence for good, discovering ways of justice and purity in other people. Once they fail to find it too many times, Virgos will pull away, get lost, turn to substance abuse, or simply separate from other people to sit on the bench, criticize and judge. Wearing the Virgo Constellation stone theSapphire is thought to make meticulous Virgos more observant, therefore aiding their quests for perfection. These blue stones are also thought to keep Virgo’s safe from the jealousy and ill-will of those who envy them. 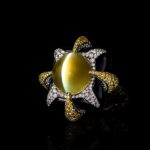