Many people wonder what is the origin of Erte jewelry, for this you must know who was Erte, his real name was Roman Petrovich Tyrtov, born (23 November 1892 – 21 April 1990) in St. Petersburg, Russia; in a distinguished family with roots tracing back to 1548, to a Tatar khan named Tyrtov. Erté was the only son of Pyotr Ivanovich Tyrtov, served as an admiral in the Russian Imperial Fleet, he was raised amidst Russia’s social elite. As a young boy, he was fascinated by the Persian miniatures he found in his father’s library, a fascination that influence in Erté giving to his art the characteristics of: exotic, brightly and patterned been this approach his signature style.

He moved to Paris at the age of eighteen known by the pseudonym Erté, from the French pronunciation of his initials R and T. He was talented as a designer in an array of fields including fashion, graphic arts, costume and set design for film, theatre and opera, and interior decor. In 1915, he began an association with Harper’s Bazaar by designing covers of each of their magazines for the next 22 years.

“Art Deco” was the artistic movement with the most important influence in his work and had a high visibility result.

He used to dream about creating a jewelry collection rich in lines and details, which he would call “Art to Wear”. His team of craftsmanship and jewelers from southeastern America created a workshop with the hand of Fine Arts Circle; the entire team was called the “Circle of Fine Arts and ERTÈ”. The team use to prepare the prototypes that Erté approved after was approved by the designer’s, an enlarged a copy of each piece that was made. Then the modeling started. This was the beginning of a cooperation that lasted about 10 years.

In his designs he enjoyed to use emeralds, rubies, blue topaz, and coral with unusual shape, cut or colors. His favorites themes were sirens, Egyptian motives, ancient Greek, the moon, the sea and animals as the peacock.

All the jewellery were released in a limited edition, numbered and signed by him and the Circle of Fine Arts. A total of 328 designs in different versions were produced.

His work may be found in the collections of several well-known museums, including the Victoria and Albert Museum, the Metropolitan Museum of Art, and the Los Angeles County Museum of Art (LACMA); as well, a sizable collection of work by Erté can be found at Museum 1999 in Tokyo. 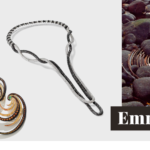 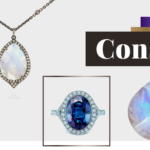