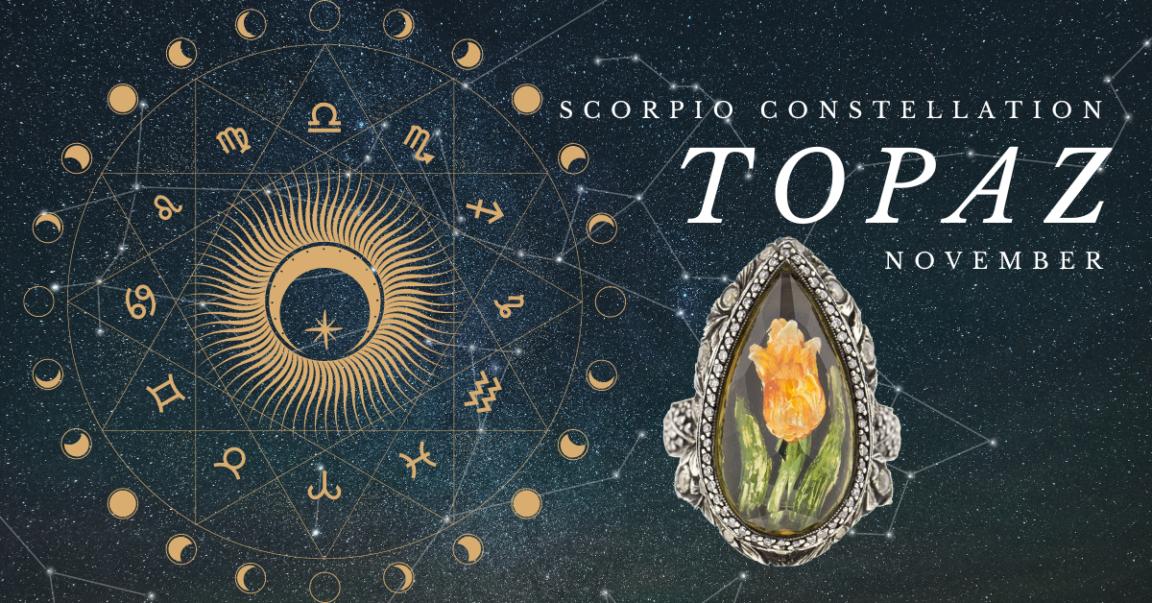 What’s the Birthstone Color for Scorpio?

Scorpios are passionate and assertive people with determination and focus you rarely see in other zodiac signs. They will turn to in-depth research to reach the truth behind anything they find important. Great leaders and guides, Scorpios are resourceful, dedicated, and fearless when there is a challenge to be overcome. They will hold on to other people’s secrets, even when they aren’t very fond of them, to begin with, and do anything they can for those they tie themselves to. This is a Water sign, and its representatives have to experience express and face emotions. Always fighting dishonesty of any kind, they have to learn not to manipulate or turn people to look their way by methods that aren’t straightforward or are just as many methods as the variety of colors in Topaz. “Jewelry needs to fulfill the function for which it came into being. The only way that a Jewelry Designer will see its art in LIFE is with the eyes, the mind, and the heart of the Spectator. The viewer in the last stroke in any jewelry piece”. – Ines Arenas Jewelry Gallery

Topaz gets its name from the Greek word topazion, which may originate from the Sanskrit tapas, meaning, “fire.” The name might also come from the name of the Egyptian island of topazes (now St Johns island) in the Red Sea. The Latin writer Pliny the Elder used the island’s name for a yellowish-green stone found there, and it soon became the name for most yellow stones. Topaz was one of the stones selected by Aaron for his priestly breastplate. He placed it on there as the second stone in the first row of stones. Topaz is also found as one of the stones in Revelation and is one of the stones of the apocalypse. In Egyptian practices, it is the symbol of Ra, the Sun-god, who was the giver of life. In Europe, topaz became strongly linked with Apollo, who is also a solar being. Topaz is found in a variety of colors such as brown, blue, green, yellow, pink, purple, and red. Topaz is even found in a colorless form, which is usually treated to show a blue hue. Though blue is a well-known color for the gem, Scorpios birthstone is an orange variety of the stone that is known as precious topaz.

The rulers of Scorpio are Pluto and Mars, one of them being the planet of transformation and regeneration, and the other pushing them forwards and providing them with enough initiative to build their lives energetic and strong. These individuals are known for being calm and cool, looking mysterious and hard to figure out. There is a deep understanding of the rules of the Universe inside every Scorpio that gives them the power others rush through life rarely recognizing within. Although there are eleven birthstones listed for those who belong to Scorpio, the main gemstone that is said to represent the sign is topaz. Scorpios are passionate and always approach life with determination. Astrologists say that the stone that balances a Scorpio’s personality is topaz. It is believed that the blue shaded topaz keeps Scorpios calm and mentally strong, attracting negative energies away from them and bringing them a sense of joy and peace. As Scorpios are emotional, this encouragement of calm is said to help them be more level-headed and prevent them from being overwhelmed by their feelings. Those who have studied astrology will often tell you that Scorpios have a dual personality, and this is another reason why topaz is the perfect stone for this sun sign – topaz is pleochroic, which means that its color appears different from different angles.

Scorpio, the Deadly Warrior Sent by the goddess to kill someone, this is a sign in search for their pray. Fearless and unstoppable, when they have a cause to fight for, they will do it relentlessly and without paying attention to possible karmic or other consequences. With deep self-awareness, they discover ways to go around their deepest, darkest motives, and shove their talents under the rug along with their dark desires. They need to set free from taboos and restrictions, discovering the freedom to scream and fight for their beliefs to find peace and happiness. Precious topaz is said to have healing powers and is believed to be a gem gifted by the sun. Early Egyptians believed it was gifted to them by the Sun God. Some people also believed that God sent this gem to protect people from danger and harm. The Greeks too claim to have first discovered topaz and thought that the fiery stone gave them strength. Europeans during the Renaissance period believed that topaz had the power to break spells and calm anger. Others say that it was found in India and the gem gets its name from the Sanskrit word Tapas, which means ‘Fire’. Indians believed for hundreds of years that this orange stone helped them live long lives and gain wisdom when worn close to their hearts.

Honesty and a straightforward approach colored with intense emotions make each Scorpio a great friend. They are dedicated, loyal and intelligent, and feel best in the company of witty and fun people who bring love and color into their lives. Their friendships are full of surprises and sudden turns and sometimes end abruptly without explanation. They understand change is the only constant in the Universe and choose to abide by it in friendships as in all relationships. Scorpio is a sign that brings Moon to its fall and with it always has a task to set free of certain family values and patterns pushed onto them at a young age. When they are in pain or suffering, they will turn to their closest family for help, feeling their love and support in the darkest of times. Still, they might fail to recognize that love can be given through light, colorful and creative expression, and finds this through the family they create, rather than the one they leave behind. Topaz can be found with fluorite and cassiterite in various areas including the Ural and Ilmensky Mountains of Russia, in Afghanistan, Sri Lanka, Czech Republic, Germany, Norway, Pakistan, Italy, Sweden, Japan, Brazil, Mexico; Flinders Island, Australia; Nigeria and the United States, Brazil is one of the largest producers of topaz

In astrology, it is widely believed that topaz has a positive influence on the life of a Scorpio. It is claimed that when a Scorpio wears rings or a pendant embellished with topaz, all the negative energy from his or her body dissipates; the stone can ward off evil and negativity. It is also believed that the golden light emitted from the stone purifies the life of its wearer. Wearing topaz beads could benefit relationships and astrology experts usually recommend that scorpions wear topaz during rough patches to help them get through. Topaz is said to influence the health of a Scorpio as well, especially with issues related to the nervous system. Other ailments that wearing topaz is said to help are asthma, sleep disorders, gout, and some mental illnesses. 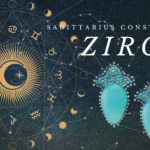