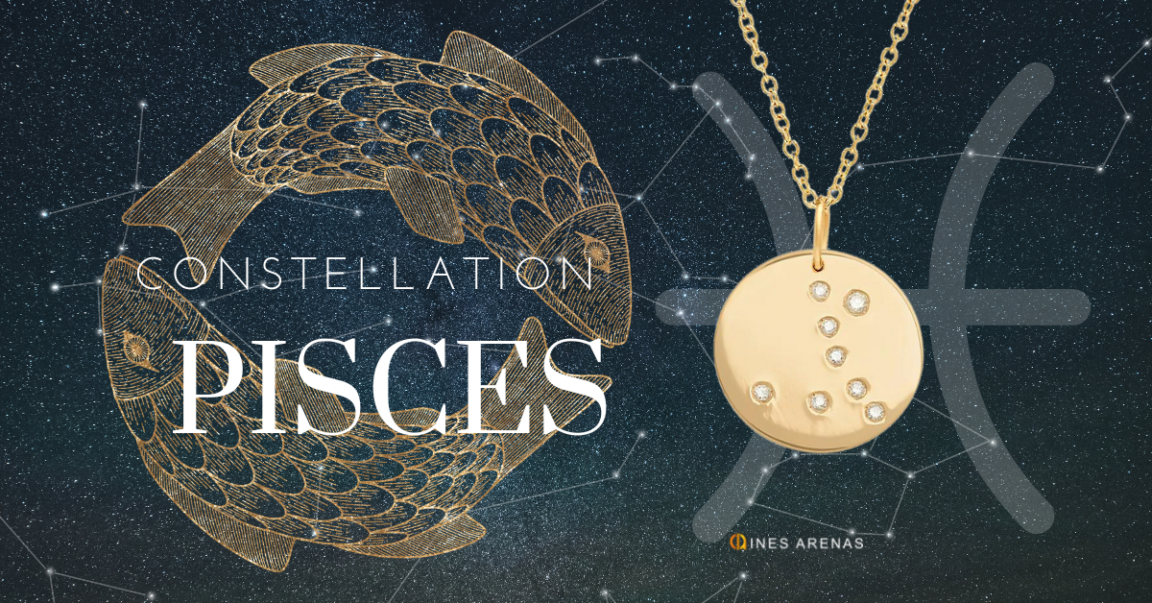 Pisces is the 12th sign in the Zodiac and represents those born between Feb. 20 and March 20. The Zodiac sign of Pisces includes six stones: amethyst, aquamarine, bloodstone (heliotrope), jade, rock crystal, and sapphire. Pisces is a constellation of the zodiac which name is the Latin plural for fish. It lies between Aquarius to the west and Aries to the east. “Jewelry needs to fulfill the function for which it came into being. The only way that a Jewelry Designer will see its art in LIFE is with the eyes, the mind, and the heart of the Spectator. The viewer in the last stroke in any jewelry piece”. – Ines Arenas Jewelry Gallery The mythology of Pisces begins with the descent onto Mt. Olympus of the great monster Typhon, threatening all of the gods and goddesses in colors of amethyst and aquamarine dash and elegance, who flee from their home. A giant made up of a human torso and head with red bloodstone eyes, his main head was composed of 100 snakeheads that matched his legs made of vipers, and his body was covered with wings made with the colors of the water: sapphire and rock crystal, the most beautiful part of this monster, his wings. At that moment the goddess Aphrodite and her son Eros (in Roman mythology Venus and Cupido) were walking along the Euphrates River, when they saw the furious Typhon with red bloodstone eyes appeared. They were scared and unable to run, so they called upon Zeus for help. Because there was no way for a single god to defeat this monster on his or her own, they resorted to morphing into two beautiful fishes of green jade and of course with purple tones as the amethyst (because let’s remember amethyst was the color of the dash of the gods and the goddess) to evade the beast and they jumped into the river made of a beautiful palette of colors like the blue aquamarine and the color of the terrible but beautiful wings of Typhon sapphire and rock crystal and escaped. Because the white color of the rock crystal is everywhere as the water. In order not to lose each other, they tied themselves together with a rope made of rock crystal-like foam of the water as they tried to escape. Once in the water, they were met by two other fishes who helped them swim to safety. Aphrodite and Eros were able to be free of the beast and as repayment, Athena placed the fish among the stars and they became the constellation of Pisces. Astrology said that Pisces is a water sign and the people born under this sign are compassionate, adaptable, devoted, and imaginative as the fishes that saved the goddess and her son at some moment in history. History? Is not history that explains the way we are and why we are like we are. Maybe the people born under this special constellation, yes! your history is full of amethyst, aquamarine, bloodstone (heliotrope), jade, rock crystal, and sapphire, and as rich and extensive as the water could be or the rock crystal.

Pisces is a water sign so it is not surprising that their birthstone is the beautiful aquamarine, which literally translates from Latin to mean ‘water of the sea’. The sun sign symbol of the Pisces features two fish and according to ancient folklore, aquamarine is believed to be the treasure of the mermaids. Pisces Constellation stone the Aquamarine is known for its impressive and soothing blue color and astrologers believe that this gem is extremely useful to the Pisceans who wear it, influencing their lives in a positive way. Those who belong to this zodiac sign are said to be friendly and calm. Aquamarine is also believed to nourish these positive traits, evoking the purity and relaxation of the sea. They are not in search of just any love you think of, but for their soulmate, someone who connects with them with an umbilical cord, ready to exchange everything they have with their Pisces partner throughout their entire shared lifetime and beyond.

There are many myths and legends about the aquamarine stone. The Romans believed that if the figure of a frog were carved on an aquamarine, it served to reconcile enemies and make them friends. Another Roman legend stated that the stone absorbs the atmosphere of young love: “When blessed and worn, it joins in love, and does great things.” Pisces Constellation stone the Aquamarine was also considered the most appropriate morning gift to give to a bride by her groom following the consummation of their marriage. The Greeks and the Romans knew the aquamarine as the sailor’s gem, ensuring the safe and prosperous passage across stormy seas The Sumerians, Egyptians, and Hebrews also admired and valued aquamarine greatly. It was a symbol of happiness and everlasting youth. In the Christian era, the aquamarine was identified with the Apostle, St. Thomas, because it “imitated the sea and the air” and the Saint “made long journeys by sea, even to India, to preach salvation.”

The sign of Pisces is a sign of incorrigible romantics, for it exalts Venus and serves love, devotion, pleasure, and all that is beautiful and tender. They are very gentle and extremely generous with their partner, but in search of love tend to forget about their moral values from time to time. They need to feel a real connection with their partners in order to open up and find that inner sense of absolute faith in an ideal love that drives them away from any idea of change. Short-term relationships and adventures are not typical for this zodiac sign, although they have a changeable note to them that allows them to be quite carefree when it comes to choosing a new daily fling. Once they discover the inner state of belief in someone they start sharing their life with, they become deeply loyal and honest, as if their sole purpose in life was to find the person standing in front of them and making them happy. In the olden days, it was believed that the aquamarine could calm the waves of the seas and had magical powers to ward off sea monsters. In modern times, the blue aquamarine gemstone is used not just for birthstone jewelry but elaborate luxury jewels and unique engagement rings. Pisces Constellation stone the Aquamarine is said to bring in a sense of calmness to those who wear it, as well as emotional balance and financial stability. The gemstone is also said to be blessed by Neptune, the god of the sea. It is hence said to help its wearer stay loyal, faithful and evoke eternal love in relationships. Some people believe that wearing jewelry with an Pisces Constellation stone the aquamarine gemstone in it helps keep them grounded, in the sense that it gives one more acceptance about their situation with less worry about chasing material things that they do not require. 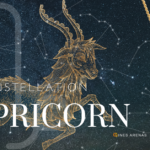 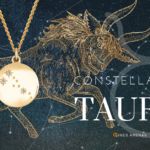